Buch campus cycles the most

2019-10-23 | The equivalent of almost 28 times around the equator – this was the distance covered by participants in the cycling competition “Wer radelt am meisten?” (Who cycles the most?). Berlin’s senator for sport announced the winners at a ceremony on Wednesday at the Olympiastadion. The Buch campus took first place in the category “Best Company.” 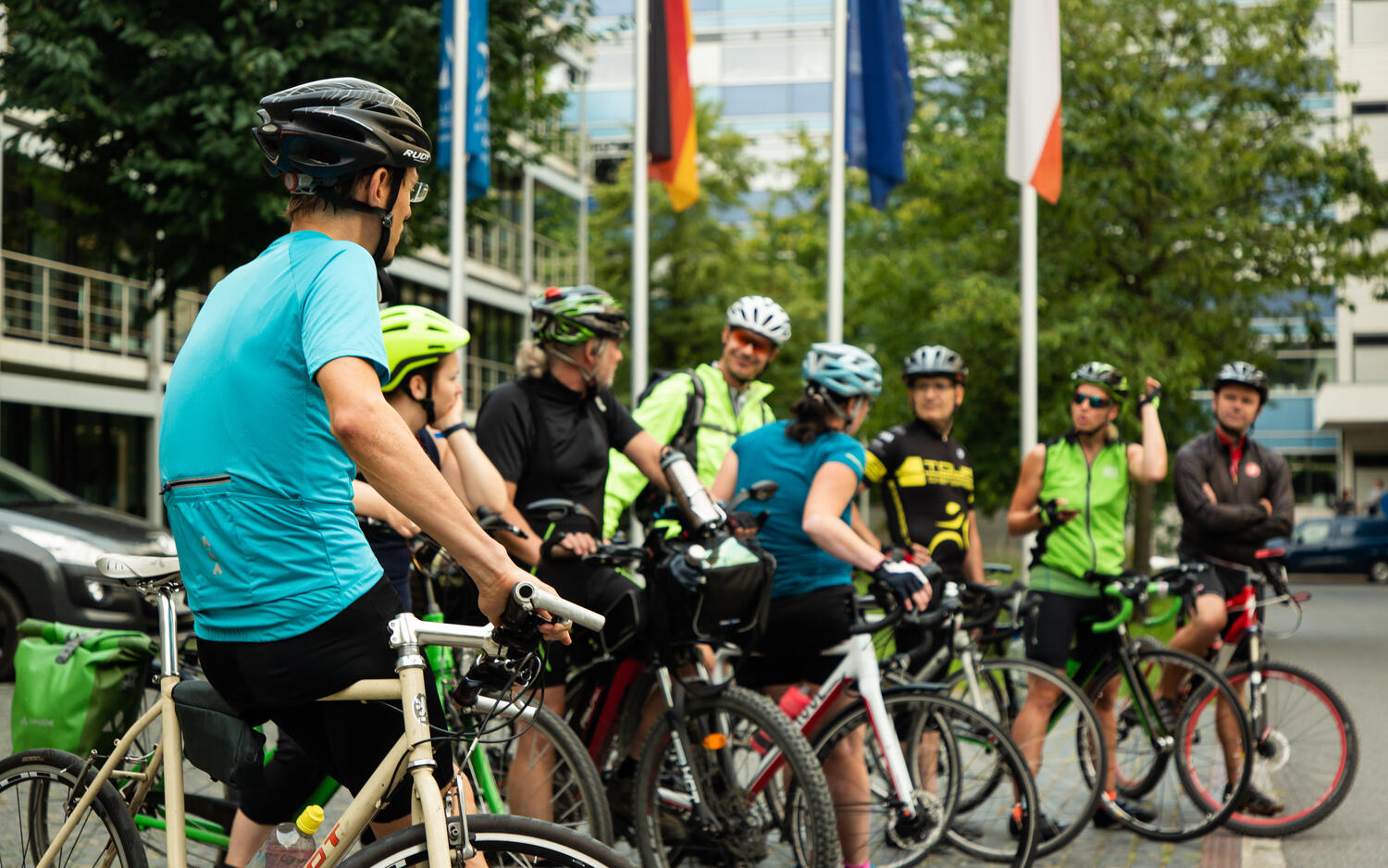 The team "Shut-Up-Legs" and other cycling enthusiasts of the Campus Berlin-Buch at the start of a bike tour from the Max Delbrück Center for Molecular Medicine in the north of Berlin. (Felix Petermann, MDC)

Exactly 359 Buch campus employees kept their feet on the pedal this August and September, competing with participants from twelve other Berlin companies in the “Who cycles the most?” campaign. Together, these employees from the institutions and companies on the Berlin-Buch campus covered 192,477 kilometers to take first place overall in this year’s competition. The Berliner Wasserbetriebe and the Vivantes Hospital Group came in second and third. Points in this competition, which is organized by the “mehrwert Berlin” initiative, are awarded based on the number of kilometers covered and number of participating employees. The team “Shut Up Legs” with Rainer Leben, Jessica Feldmann, and Holger Gerhardt of the Max Delbrück Center for Molecular Medicine (MDC) came third in the “Best Team” category.

Today, Andreas Geisel, Senator for the Interior and Sport, presented prizes in the three categories “Best Company,” “Best Team,” and “Best Cyclist” at Berlin’s famous Olympiastadion. Professor Heike Graßmann, Administrative Director of the MDC in the Helmholtz Association congratulated the prize winners: “Cycling is environmentally friendly and contributes to a healthy lifestyle. Congratulations to all our employees who got on their bikes come rain or shine.” Dr. Christina Quensel, managing director of Campus Berlin-Buch GmbH, and Graßmann jointly accepted the victory trophy on behalf of the campus. “We are delighted to have taken first place, which the employees of the companies and institutions on campus won together. ‘Who cycles the most?’ is always an exciting occasion and fits wonderfully with our campus, which last year was certified by the EU as a cycling-friendly employer,” said Quensel.

About the “Who cycles the most?” competition
A total of 1,945 employees from 13 municipal companies in the mehrwert Berlin initiative took part in the competition “Who cycles the most?”, cycling the equivalent of 27.5 times around the equator. The aim of the competition is to promote employee health and environmentally friendly mobility. The 2019 event was the eighth edition of this cycling competition, and was organized under the umbrella of the mehrwert Berlin initiative – an association of public companies. Throughout August and September, participating employees kept a record of all the kilometers they covered on their bikes – either on their commute, at the weekend, or on exercise bikes at the gym. The average distance covered was 580 km per person. The companies were then ranked using a formula that takes into account the number of participants in relation to the size of the company, and the average number of kilometers cycled per person.

The Berlin-Buch campus is not only home to the MDC, but also to the Leibniz-Forschungsinstitut für Molekulare Pharmakologie (FMP); the outpatient clinics of Charité – Universitätsmedizin Berlin; the Experimental and Clinical Research Centre (ECRC ), which is jointly run by the MDC and Charité; as well as the BiotechPark, which includes 62 businesses.

How can you work healthier at a computer screen?